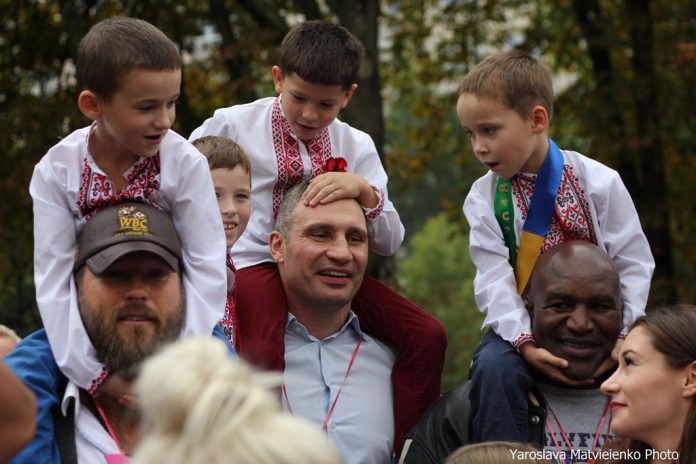 The second day in the capital of Ukraine for the legends of world boxing Lennox Lewis, Evander Holyfield, Marvin Hagler, Oscar De La Hoya and the entire large delegation was even more active and interesting.

As part of social component of World Boxing Council WBC cares, guests visited City of Happy Children Center. Now in the center there are forty children who received something more valuable than the most expensive gifts – the attention of indifferent and caring people with a capital letter.

The pupils of the center arranged an improvised music and dance show for the guests and prepared for them flower medals made from colored paper.
«In a circle of children, these strong athletes can be open and even vulnerable. But we are engaged not only in children, but also visits to veterans, to victims of natural disasters, we visit hospitals, gyms, prisons. Many people from around the world come together in our charitable organization, and such meetings are very important. For us, this is a privilege and a blessing. I am a little prejudiced, as my roots are in Ukraine, and I am here for the first time. My expectations were positive. I must say that your country is very friendly and warm, so I simply enjoy my stay here. I see that the children in this center are happy», notes Jill Diamond, head of WBC cares.

From the orphanage, some of the guests (Evander Holyfield, Mauricio Sulaiman, Julio Chavez, Marvin Hagler) headed by the mayor went to meet the President of Ukraine, Petro Poroshenko.

The majority of the delegation was expecting another important social event: the opening of a boxing gym in the Solomenskiy district of the capital. Boxing in the gym will be free for children and young people. After the official part, WBC members had the opportunity to see not only the gym, but also the trainings themselves. Some guests organized impromptu workshops for children.

12-year-old Sasha shared his impressions with us:
«I have been involved in boxing for eight years. My dad is a boxer and taught me boxing since the age of four. I have never felt this before, I would like to try it again (ed.- to practice with such champions). For me, the greatest examples are Lennox Lewis and Vitali Klitschko. My plans for the future – to become a great boxer».

The guests of the capital remained almost more enthusiastic about both visits than the children, for whom these meetings became unforgettable moments for the rest of their lives.

«I love every bit of being here! It’s fantastic. I would have stayed here», the famous American boxer Jerry Cooney confessed to The Journalist correspondent, whom colleagues could hardly pull out of the gym. – «I am delighted with the gym and these children! I want to give them what I know to improve their lives. I train about thirty children at home, in the USA. I just want to give back. When I grew up, I had no one to help and do the same for me. I grew up myself, because when my father was at home, he beat me all the time. I was feeling bad. I myself have three children, I am a lucky man. And I am lucky to be here. If Vitali invites me, I will come again with pleasure. These children need a voice; I want to give them a voice of confidence. We all need it».

All visitors of Gulliver shopping center, who were not aware what is going on and as usual came for their evening shopping, were able to assess the scale of boxing’s popularity. About ten thousand people came to see their favorite athletes: Vitali Klitschko, Evander Holyfield and Lennox Lewis. A third of those gathered received a coveted photo with a signature and were able to personally shake hands with the boxers.

In the evening a boxing tournament «Together with Legends» took place in the capital’s Sports Palace. One can only imagine how worried the participants were Ramil Hajiyev and Karen Chukhajyan, Hasan Baysangurov and Aram Faniyan, because their fights were watched by Mauricio Sulaiman, Lennox Lewis, Evander Holyfield, Nazim Hamed, Erik Morales.
The events of the third day of the congress were no less interesting: the Klitschko Expo hosted a lecture by the legendary photographer Neil Leifer, who had a photo chronicle of the 16th Olympic Games, 4 world soccer championships, many boxing fights of the highest level, including all fights with the participation of the «Greatest» Mohammed Ali. 170 photos of Neil adorned the cover of the most famous sports magazine of the world – Sports Illustrated.

In the evening, the boxers impressed with their not sportive talents at musical show «WBC has talents». Vitali Klitschko and Mauricio Sulaiman performed the world famous hit The Beatles «Let it be!» as a duet. It is not all about boxing after all.

The official closing of the Congress took place on Thursday evening in KSCA hall. Vitali Klitschko thanked all the participants, asked for forgiveness for the cold weather and promised that by the next congress sports school in Mariupol would be opened.

Finally, on Friday morning, for the congress participants, they had a tour in the Museum of Achievements of the Klitschko brothers.