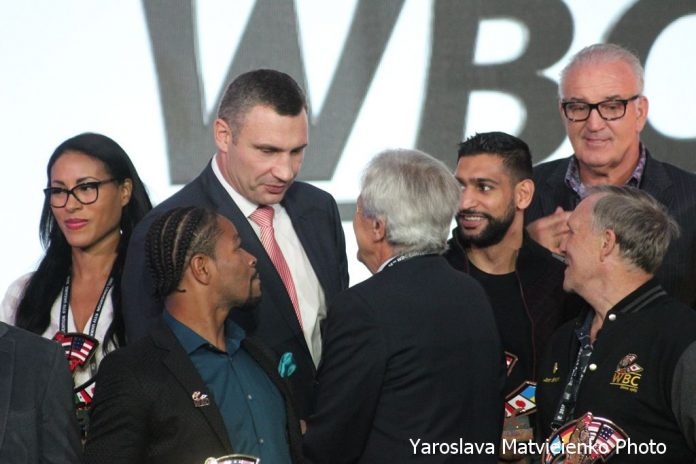 Today, the 56th Congress of the World Boxing Council (WBC) officially opened in Ukrainian capital, which will be held until October 5, inclusive. One of the biggest sports events of the year gathered in Kyiv more than 700 participants from 160 countries of the world.

Before the beginning of ceremony, greeting speech was given by sportsmen whose names are known all over the world:

«It’s a great pleasure for me to be in Kyiv once again. It’s a wonderful occasion to visit my friends Klitschko brothers. Those who miss this congress will surely be sorry, because this is one of the biggest events in the world of sports. I’m happy that I’m here at this conference, which promises to be the best».

Evander Holyfield
«It’s an honor and a joy to be here. Thank you!»

Wladimir Klitschko
«Welcome to convention in city of Kyiv. I’m one of the present here who doesn’t have WBC champion belt. And it’s only because of my brother and I our promise not to fight each other! I wish everyone a wonderful time».

On Postal Square, a tent with a red carpet was specially equipped especially for the occasion: according to the best traditions of holding such a large-scale event. Everything was organized at the highest level. Perhaps, it may seem to someone that different official ceremonies are long, pathetic and boring. In most cases this is so, but fortunately it’s not about today’s event. For three hours, those presented there had the opportunity to fully immerse themselves in the atmosphere of boxing and its history.

It was, undoubtedly, the morning of justice triumph. Firstly, at Wladimir Klitschko, at last, has long-deserved WBC champion belt. Recall that this belt was missing from his collection for only one reason: Klitschko brothers promised their mother never to stand against each other in battle.

Secondly, a copy of the document signed by the US President Donald Trump about posthumous rehabilitation of boxer Jack Johnson (1878-1946), who was once unfairly convicted of «immoral behavior», was brought to Kyiv. His case has long been regarded as the «extreme manifestation of racism».

Third, and most important. Vitali Klitschko and Lennox Lewis met again in boxing gloves. Recalling the historic battle on June 21, 2003 in Los Angeles, the athletes finally decided who won. Many were extremely interested to hear the comments of two legends about this fight, which was again demonstrated on the big screen. And the victory remained for Boxing.

A special occasion to be proud of is now set for every Ukrainian fan of boxing and sports. Since today on WBC champion emerald belt Ukrainian flag is placed, which will remain there forever.

In his comments to Ukrainian and foreign media Vitali Klitschko admitted that he missed boxing greatly as it is always will be part of his heart and that acquired sports skills were useful in his new professional life as mayor.

Answering the question of The Journalist correspondent, president of World Boxing Council (WBC) Mauricio Sulaiman guessed about the secret of success of Ukrainian boxers:
«Each of them has a big heart. In addition, their legacy – for so many years they all have been inside and outside very strong warriors. And they demonstrate this with success. Ukraine is now one of the top-most boxing countries. My organization and I will work hard to do everything possible to ensure that in the near future battles for the WBC title are held in Ukraine».

Tonight there will be a closed charity auction. Collected funds will be used to build a sports school for children and youth in the city of Mariupol. Tomorrow the guests will visit the Children’s Aid Center «City of Happy Children», open a new boxing hall «Lake», and also hold a photo and autograph session with fans in Gulliver shopping and entertainment center.

More details about the opening in The Journalist video story.

Earlier, The Journalist reported about how Vitali Klitschko commented on future meeting with Lennox Lewis.