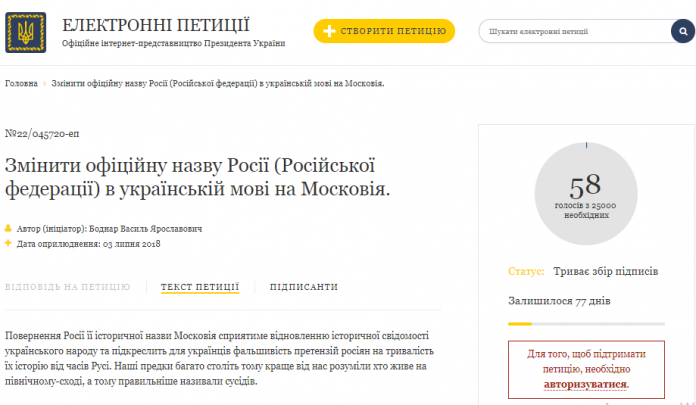 President of Ukraine Petro Poroshenko was called upon to change the official name of Russia in the Ukrainian language. Relevant appeal made public on the website of electronic petitions of the Official Internet representation of the head of state.

The author of the petition No. 22/045720-еп, which was published on July 3rd, 2018, is Vasily Bodnar. He suggests changing the name of the Russian Federation state to the Moskoviya in Ukrainian.

«Russia’s return to the historical name of Moskoviya will contribute to the restoration of the historical consciousness of the Ukrainian people and will underline for Ukrainians the falsity of the Russians’ claims on the duration of their history since the times of Rus. Our ancestors many centuries ago understood better than we who live in the northeast, and therefore the neighbors were more correctly called», the petition says.

As of the evening of July 18th, 49 signatures of 25,000 required were collected.
Earlier «Journalist» reported that a new state appeared on the map of Europe.