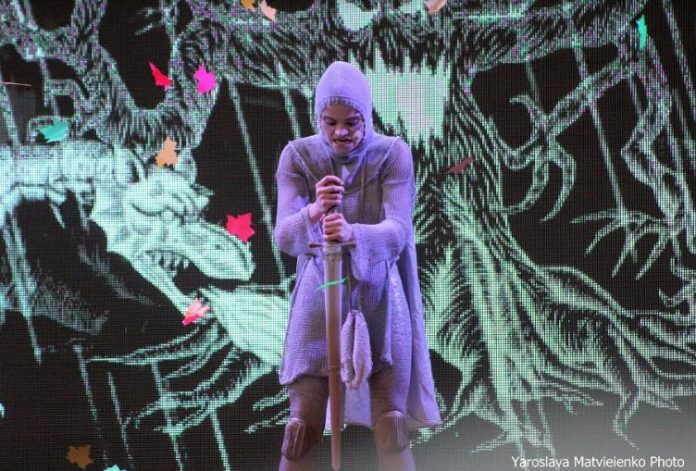 Last week, in the framework of the Open Air of The Ministry of Foreign Affairs of Ukraine, already traditional for the Ukrainian capital, and together with the festival «Anne de Kiev Fest», a premiere of the historical performance about the granddaughter of Prince Yaroslav the Wise – Edigna was held.

So who is this mysterious Edigna? Few people have not heard of Yaroslav the Wise’s daughter Anna Yaroslavna, who became the queen of France. Those interested in history, know that our princess and French King Henry had three sons, including the future King Philip. They also had a daughter. For many, this figure will be a real discovery. Being heir to an outstanding dynasty, she won fame and honor in Bavaria, Germany. What is known about her life, looks like an ancient legend or a fairy tale, but too real: all this could be true.

As Wikipedia writes, Saint Edigna (*1055 – † February 26,1109) is a blessed Roman Catholic church and the Ukrainian Greek Catholic Church. The daughter of the King of France Henry I and Anna Yaroslavna, granddaughter of the Prince of Kyiv Yaroslav the Wise.
Edigna received an excellent education at the French court. According to one version, around the year 1074, a nineteen-year-old Edigna fled the royal court, refusing forced marriage. According to legend, she left the royal palace, taking a bell with her – a gift from her mother. I intended to get to Kyiv about which I heard so much from her mother Anna Yaroslavna. Others suggest that the girl decided to make a pilgrimage to the Holy Land.
However, on the way Edigna saw a dream that opened her destiny: she should stay forever where, at the same time, she would hear the roar of the rooster and the sound of the bell. The prophecy came true near Puch village in Bavaria, 30 km from the modern city of Munich (Germany).Edigna settled in the hollow of an old linden tree and lived in it like a nun in a cell for more than thirty years. She ate only plant food, led a pious lifestyle. She taught the children reading and writing, introducing them to Christian values. A healer gift was revealed to the preacher of the faith of Christ. For many years she treated not only the local population, but also cattle; helped people in overcoming diseases and troubles. The glory of the healer Edigna spread throughout Bavaria. During the life of Edigna a church was built near her the lime tree, in which the blessed one was then buried. She died on February 26th, 1109. Grateful peasants buried her in the altar of the church. She did not reveal her high origin, it became known only after her death. In 1600, the Roman Catholic Church proclaimed Edigna saint and blessed.

The granddaughter of Yaroslav the Wise still made her dream trip to Kyiv, though in a thousand years. This was made possible by a whole team of historical and creative enthusiasts: production author Fedir Balandin, founder of «Anne de Kiev Fest» festival, the text written by the famous Ukrainian poet Aleksander Irvanets, for the artistic beauty and undeniably aesthetically perfect visualization of the history of answered Andriy Ermolenko and Aleksiy Berezyuk, music – Ivan Nebesniy. Legendary historical figures on the stage brought to life (some personally, others – virtually, giving voice) Prince Yaroslav the Wise – Fedor Strigun, Prince Hugo – Ostap Stupka, King Henry the First – Yevhen Nyshchuk, Kobzar – Taras Kompanichenko. Female images are the real highlight of the whole performance. The role of Anna Yaroslavna was given to Irma Vitovskaya-Vantsa. Edigna was supposed to be played by writer Irena Karpa, but it did not work out.
«How difficult it is to be the daughter of the king» through the prism of her character told us young talented actress Anastasia Bazhchuk.

In 2019 Edigna’s story will be picked up by Bavaria: the premiere of the play about the difficult fate of a young woman, of whom her grandfather Prince Yaroslav the Wise would be proud without doubts, is set for February.

UIA will dismiss 900 employees due to lockdown

Air travel between Ukraine and Austria may resume after June 23