A U.S. military transport plane made an emergency landing at Odesa International Airport due to a malfunction of one of its four engines. This was reported by the press service of the airport.

During a scheduled flight from Ramstein Air Base, a U.S. Air Force military transport aircraft made an emergency landing at Odesa airport.

The plane successfully landed on the runway. Nobody was hurt during the incident.

Technical services are engaged in troubleshooting. 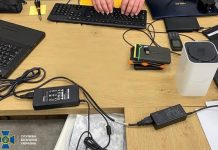