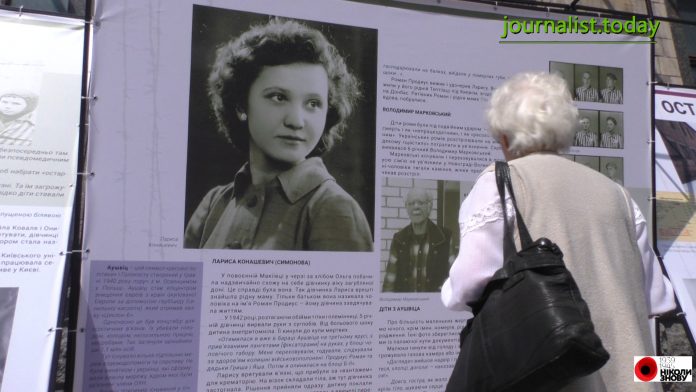 Photo: video fragment
May 8, in the center of Kiev, on the Khreshchatyk street, near the main post office building, exhibition «Triumph of the person. The inhabitants of Ukraine, which passed the Nazi concentration camps» was presented. Opened to the day of the end of the World War II in Europe, exposition tells about 30 fates of the inhabitants of our country, survived in different concentration camps of the Nazi Germany.
The info placed on the exposition’s displays, shows to the visitors what terrible torment people survived during the World War II. Moreover, they even tried to oppose and create underground organizations because they cannot accept the fact the Nazis mocked their compatriots and other prisoners at concentration camps.

«This exhibition is dedicated to the heroes who passed the horrors of the concentration camps. This is a terrible test for a person not to break, but to fight! The testimonies, gathered from archival documents by historians, suggest prisoners were not indifferent or passive. Even in such an unhuman conditions, these people accumulated strength itself to resist inside the concentration camps, to prove that freedom is the greatest value. The events in their lives, their destinies – this exhibition is intended to tell about those, who passed these concentration camps. The society, especially the younger generation, must be informed about these aspects to be proud of every hero who has done everything in order to have peace on the Earth. This exhibition tells about 30 fates from 11 concentration camps», – said the Minister of Culture of Ukraine, Yevgeniy Nishchuk.

The initiators and organizers of an exhibition are: Ukrainian Institute of National Remembrance, Center for Research of the Liberation Movement in Ukraine, National Museum of the History of Ukraine in the Second World War, Memorial Museum «Prison in Lontsky Street» and the Sectoral State Archive of the Security Service of Ukraine.

«First of all, this is an actual topic. Second, this is the main topic of the National Museum of Ukrainian History in World War II. Thirdly, our foundations have a large amount of information, which illustrates the lives of former prisoners of Nazi concentration camps. In particular, the exhibition presents 7 complexes from the foundations of our museum, which tell about prisoners of war, priests, Ukrainian liberation movement participants and about women and children. This exhibition can show Ukrainians have not lost their humanity in concentration camps, despite all the horrors that they have gone through», – said academic secretary of the National Museum of the History of Ukraine in the Second World War, Volodymyr Simperovych.

More about the exhibition «Triumph of the person. The inhabitants of Ukraine who have passed the Nazi concentration camps» watch in the video made by «The Journalist».